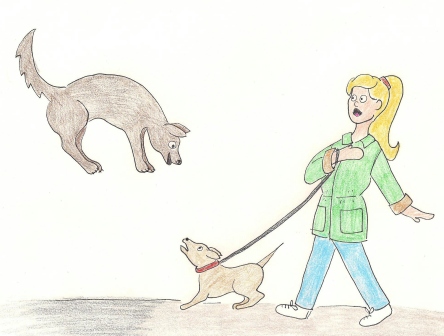 After our encounters with the cranky terrier, I changed the walking route Toby and I take each day so that we could avoid trouble.  Turns out, trouble has it in for us anyway.

Toby and I were nearly home after a beautiful early evening walk.  Our path took us through the parking lot of one of the local churches.  Normally church lots are empty on Thursday evenings, but this day some guy decided to use the lot as his own personal off-leash dog park.  His pack of spotted monsters took one look at little Toby and flew over to growl at him and bite at him and even flipped him over.  Poor Toby had no idea what to do.  He was spinning around like crazy to make sure none of the monsters could attack him from behind.

Eventually the irresponsible human came over to try to bring back his dogs.  None of them responded to his voice commands, and he resorted to yelling, hitting and kicking them.  At least one of the dogs turned and bit him.  After all that, he didn’t even utter an “I’m sorry” to us.

It is amazing how stunned you can be in a situation like that.  I don’t know if I had had Dog-B-Gone spray on hand if I would have had the presence of mind to use it.  I got Toby out of there as quickly as possible, not even thinking of getting the guy’s license plate until it we were already home.

The next day, I ran into a neighbor and told her about the attack.  Her yard abuts a different church’s property, and she said that two days before she had found a guy running his dog off leash.  She yelled at him that he had better put a leash on his pet.  From her description, I think it was the same guy that I ran into the next day.

I am so irritated by these idiots.  If you want to run your dog off leash, there is a dog park one community away.  Just take them there.  Of course, if this guy’s brood is as unfriendly to others as they were to Toby, he should keep them at home on a leash.  Maybe train them a little so that they come when called.

A few years ago I remember seeing a bra advertised that would sense if  person’s heart rate were elevated suddenly.  If so, it would notify the police.  I wonder if they have something like that in dog collars? 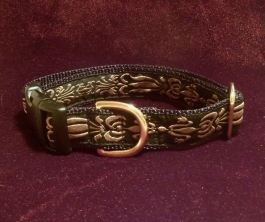 Come to a happy place where dog attacks never occur, and all pups have a great time.  Come to the MOTI (Museum of the Imagination) in Dream Our World!  In it, the boys view the world of art from a canine perspective with a dash of humor and a lot of fun.

Dream Our World is available from Amazon.