Since Geordie’s cancer diagnosis, I have found it difficult to write about my boys or even draw and post silly pictures of them.  Instead I write about Toby and me going to visit the fallen tree.  It is my way of coping.  We have had some really good days lately, though, and I want to hold onto them here.

On Saturday, Geordie surprised me by waking me up an hour early to tell me that it was sunny and cold out.  He was so excited that he wanted to leave for a walk right away.  When I told him I needed to get dressed first he stormed off in a huff and threw himself down on the kitchen floor.

After a few minutes for my morning routine, I got the boys dressed in their harnesses, and we headed out.  I was totally stunned at how far my little boy was able to go.  We wandered for over a mile together as my two marked everything they could reach.  I could see a difference in Toby as well. He really loves walking with his brother.  The two of them were calm and cooperative.  It was a joy to be with them.

The day ended well with two pups who ate heartily and slept soundly.  When you have a sick puppy, those simple things are so significant.

While Toby behaved with Geordie nearby on our Saturday walk,  he did not do well when he and I were together.  It is my fault.  In most things he does so well that I don’t train him as often as I should.  This evening I decided to try some training like I used to with Geordie.

To start, I grabbed three of Toby’s toys: a puppy, a kitty and a fox.  I brought some treats, then I asked him to touch the animal I named.  Geordie heard us having fun and came over to join in.  Geordie always loved doing tricks like this.  He knew so many words and instructions that it was spooky.  He and Toby played this game until we ran out of snacks.  It was the happiest and most engaged that I have seen Geordie in a long time.

I was so excited about what we’d accomplished that I wanted to play again, but I know you can only teach a pup for a few minutes at a time.  I feel bad that I haven’t been doing this more with Geordie over the past year.  His diagnosis was hard on me, and I treated him as a delicate little china dog instead of a guy who liked puzzles and games.  I hope there is still time to make up for that. I want his memories of this lifetime to be happy ones. 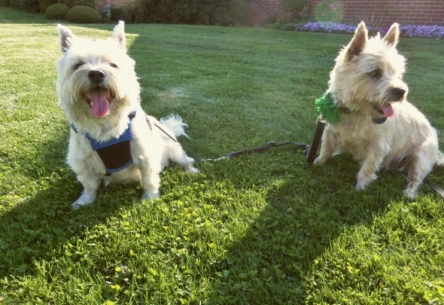 We got off to a rocky start, but we like walking together now.